This is a point of purchase display for shaving gel or other cylindrical items.  It holds 12 cans in a two tiered, gravity feed, first-in-first-out arrangement.  The front panel provides “billboard space” for product advertisement with either a sticker or a pair of stick-on J-channels, tilting forward for ease of filling and locking with a detent in both open and closed positions.

Furthermore, the display is able to easily expand sideways to accommodate promotional cans that are taller than normal, such as “25% MORE FREE.”  The unit is easily adjusted by simply pulling or pushing on the side panels, which click securely into both positions.  There are also sighting holes whereby the user can hold the unit up to a light and verify that all of the adjustment points are fully extended.  This device is US Patent #7,850,015

I was given an artist’s concept rendering of what the customer wanted, and essentially did everything else on the design side – functional concept sketches, mockups, testing, CAD detailing, design for manufacturing, generating patent drawings, prototyping with 3D printing, evaluating first articles, recommending corrections, and developing a quality assurance plan for the manufacturing floor.

The molds were exceptionally complex to design, incorporating multiple family tools, snap fits, moving parts, sliding shutoffs, lockouts, interference detents, mounting bosses for adding screws, zero taper pin bosses, strategic ejector pin placement, trapped ribs, core-cavity features, parting line transitions, steel safe details, and more.  When the project was over, the head engineer told me that since I made this work right the first time while only modifying the mold on things that were initially made steel safe deliberately, I was ready to design almost anything for injection molding.

The Pharaohs of Egypt used wax seals to authenticate documents on papyrus, their use only fading in the early 20th century with the advent of the lick-and-seal envelope.  I bring seals and signet rings into the 21st century by making them with 3D printing and using SolidWorks to generate true 3D perspective and make details stand out

Designing a wax seal is much like designing an injection mold, taking into consideration flow, draft, and avoiding undercuts.  I model what the final wax will look like, then subtract that solid from a base seal or ring.  The top of a seal is also marked with a miniature version of the wax image in order to make it easier to align the design when using the seal and differentiate between several seals sitting on a table at a glance.  Most of my business comes from crafting custom signet rings to a client’s design, which often incorporate traditional family arms, heraldry from the Society for Creative Anachronism, or more modern devices.

I enjoy shaving the old fashioned way, with a brush and a safety razor.  The stand I bought to hold the brush to dry properly had some shortcomings – 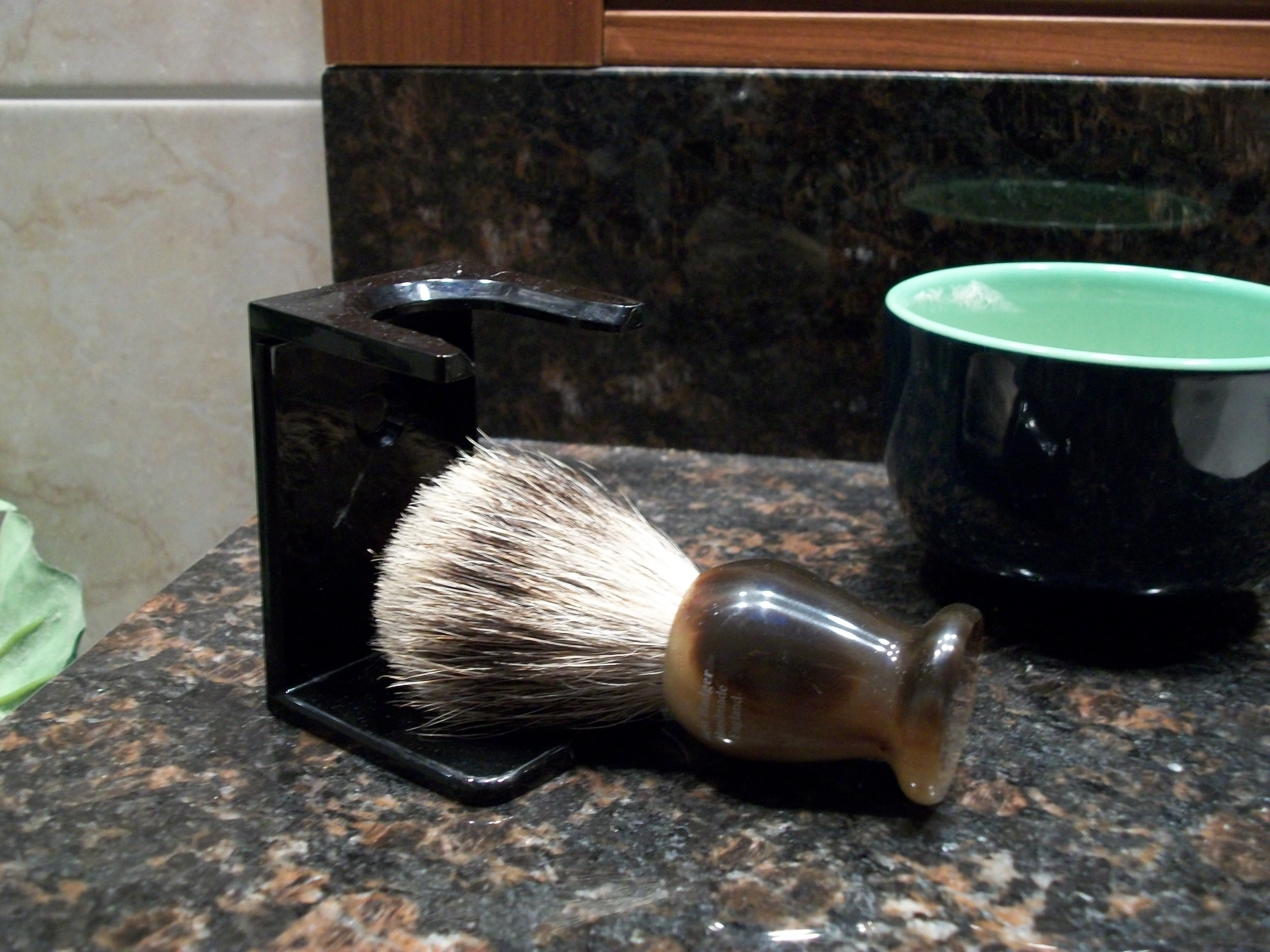 The brush falls off easily and frequently.  Looking closely, the arms that hold the brush are flat horizontal, missing an opportunity to use gravity to help hold it in place by tipping the fork up a bit.  I also wanted the stand to hold my razor, and catch drips of soapy water so they don’t make a mess on the counter.  There are a few items that can be bought online, but they are very expensive.  With 3D printing, I can make my own and be sure that it fits my implements perfectly.

After a customer requested a version to accommodate a longer razor handle, the XL version was born: